Last week I mentioned I would write about a mini project I have worked on this week. By mini project - the project itself currently has approximately 8 hours worth of work - which is very small. It is more or less a proof of concept of the game-play itself. I'd like to thank my colleagues in particular who provided feedback on the game itself as well as play-tested it! 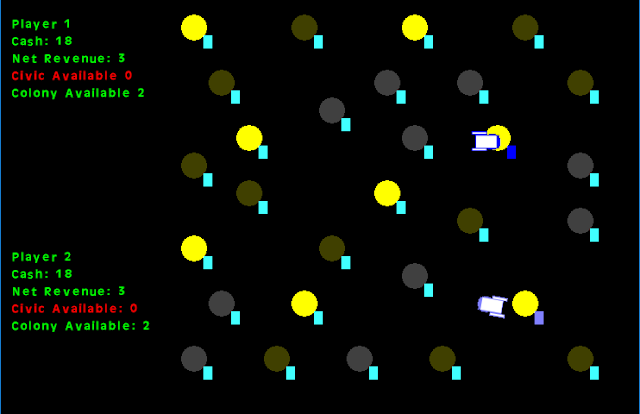 Each planet provides both an income and expense when purchased. Once players reach certain amounts of cash (100, 300, 600 and 800) two pirates will spawn on a planet owned by each player. These pirates will seek out planets purchased by players and will begin to harass the planet. The owner of the planet will have to pay a higher expense - if the pirate is near their planet. The way you solve this issue is by flying towards the pirates - who will begin to fly away from you. The general strategy is to attempt to push the pirates onto the opposing player - to hopefully increase their expenses, and lower your own.

That is the game itself in a nut shell. The interface and graphics as you can see above are highly simplistic - overly so. One of the biggest issues raised as the game was played is that both players were not sure what they were doing - since the planets themselves did not look immediately evident. The game-play itself was enjoyed - however the interface and graphics need a large amount of work. This makes sense since from the 8 hours of work - probably around 7 of which was spent coding and designing the game-play; so it makes perfect sense that these turned out to be the issues experienced by the players.

Changing the planet's sprites, making the player's ships more obvious and recognizable and providing the player with more information as to what each planet does - are the major elements that require improvement within this small project. I may spend time fixing up this project further given free time - and I will take another look at the project in terms of play testing if so!

This was a very interesting mini project to work on - it was essentially a small warming up session to get back into GML coding after the month-long period I had spent prior to starting off the masters as a small rest-time before jumping into the larger workload required in the masters programme!

Until next time,
Dylan
Posted by Dylan Moon at 06:31 No comments:

Firstly I wanted to apologise for the late upload - with the Masters Programme time has been rather tight and yesterday was particularly tight. However - I wanted to touch a bit on Game Maker as it's been a fair while since my last post on it. That is not to say - that I haven't been using the engine or that I've moved on from it - however other posts and time constraints meant that I was limited to what I could write with regards to Game Maker progress up to now.

However - as part of the Masters Programme - we have been receiving a number of tasks towards developing small projects using Game Maker. I will be unable to post a number of the works done - simply because the assets used are not mine personally - so I would rather not post work not my own; even if they are open source or free. If I don't know if they are open source and I don't know who to credit for their creation - then I will simply either use my own assets or keep it off the blog.

As part of the small project I am working on this week however - the challenge was given to create a non-violent conflict game. The first idea that came to my mind was using Trade. The theme itself was in space - so Space Colonies came to mind.


The idea itself - after I spent some time fleshing it out - will be something along the lines of the following. The game will consist of a minimum of two players. Players will be competing to earn the highest amount of credits. The game will be played on a randomly generated map - with 3 types of planets to start with [Plains, Forest and Asteroid]. Players can set up Civic colonies on a plains planet - which lets them maintain 2 other types of colonies. Forests will allow for agriculture colonies which will maintain civic colonies and finally mining colonies will be the major income source built on Asteroids.

As both players accumulate more and more income - pirates will begin to spawn. Pirates lower revenue and increase expenses for any colony that are nearby; players will be able to fly towards the pirates to scare them away. This opens up the strategy of pushing pirates to the opposing player.

This is needless to say very basic and bare bones currently. However - since the project must be complete before next Monday - it has to be rather small. That being said - I will likely be using a lot of my own work on this project - so I will look into posting more information on it next time!

Until next time,
Dylan
Posted by Dylan Moon at 07:55 No comments: