This week I decided to show you a small side-project I've been using as a rest when ever I felt like coding but wasn't keen on working on Privateer Dungeoneers. Up to this point - Grid-Conquest as I've called it, clocks up to around 4 hours work - I'm rather fond of how it's turning out! 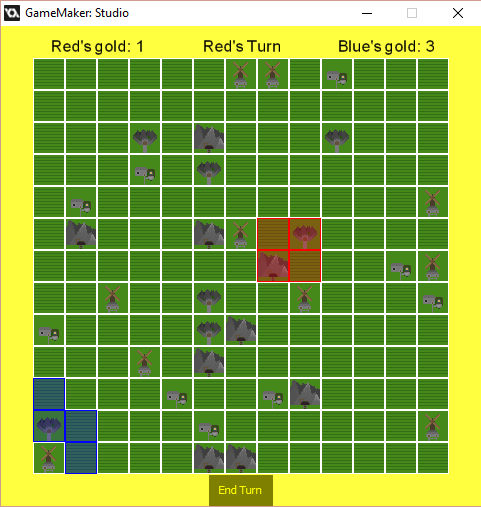 The game is played by two players - each in control of a kingdom, blue or red. Your goal is to expand your kingdom and earn more gold than your opponent. With that in mind - there are a number of different territories or tiles you can purchase. 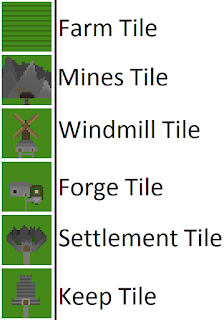 At the moment - the game has a total of 5 different tiles. The farm tile is the most common tile as can be seen above. It provides the player a minor income as well as the ability to expand their territory. The mines are a more expensive tile that will provide a higher return than your farm tiles. The Windmill and Forge are tiles that are complimented by owning other tiles. The Windmill gives you more income the more farm tiles you own, and likewise the Forge gives you more income the more mines you own.

The Settlement tile is an expensive tile that gives you a small amount of income - however it has 1 distinction between other tiles. All other tiles require you to own territory adjacent to it before you can purchase it. Settlements are an exception - they allow players to purchase even if they do not own territory adjacent to it. This allows a player to expand in regions if they have the money to purchase a nearby settlement.

The Keep tile is currently not used in-game because I'm debating how to implement ways to interact between the two player kingdoms. Be it using raiding - or perhaps even allowing players to capture opposing player's regions. The Keep would serve as protection against raids and capture. That's the idea up until now at any rate. I still need to decide where I want to take that concept however.

The game itself plays using a mouse - I am also thinking it might be a perfect fit for a tablet game since both players use the same 'mouse' input. It may also provide me a means to test out network coding and play. The way the game is coded does allow for more than 2 players - so that can also be an idea I can toy with!

Until next time,
Dylan
Posted by Dylan Moon at 07:32 No comments:

This week it was a small update - but a rather significant one!

I managed to implement a simple system that adds a fair amount to the game itself. Many games use fog of war to hide information from the player and encourage them to explore. In this situation the situation is similar! 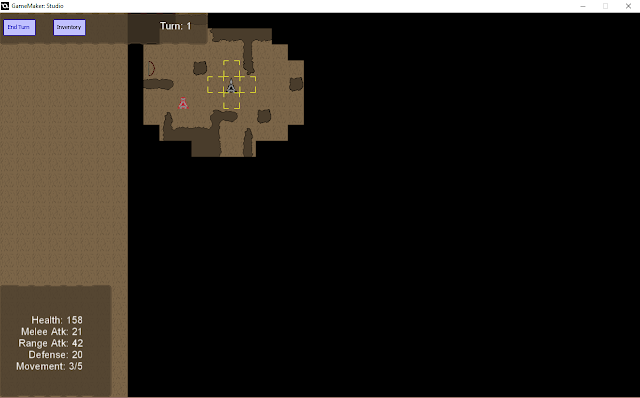 There are a few adjustments I am looking to make to the system - such as making the edge of the fog be smooth similar to how the walls work within the game using a Smart-Tile system. When I added this feature the game immediately felt far more fulfilling - not knowing whats behind the next corner is part of the value of the experience the game seeks to provide - exploration!

Until next time,
Dylan
Posted by Dylan Moon at 03:54 No comments:

I'm quite excited by what I have to show you this week - I implemented the basic recruitment system into the game! The system is quite essential as it is required for you to not only re-coup fallen troops but also progress forward in terms of increasing your army size - allowing you delve deeper into dungeons, and defeat larger enemy forces! 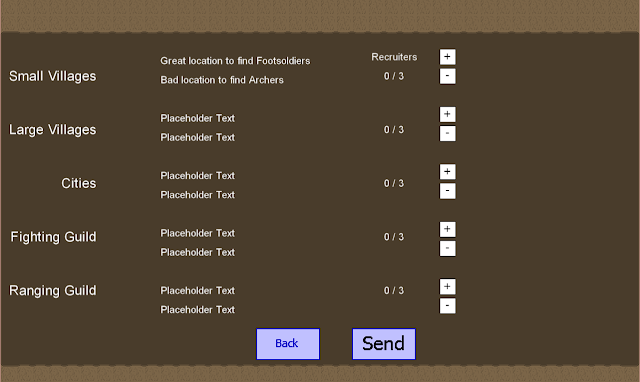 The system currently functions by allowing you to send recruiters to 5 different areas. Each area has it's own parameters that determine what types of troops come from that area. The amount of recruits you get depends on your Renown - which you earn by clearing dungeons and conquering enemy forces, you also lose renown by actions such as being defeated. You can also increase the amount of recruits from a particular location by sending in more recruiters to that particular area! 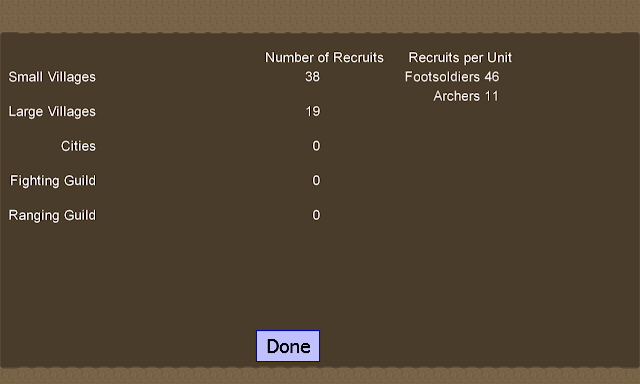 After you send your recruiters - you move onto the recruitment report screen. As you can see - this screen shows you how many individuals you were able to recruit - as well as the types of units these recruits will join!

As I continue to add different types of units - areas such as Cities and the Guilds will be a valuable location to seek elite units - however if you limit the amount of troops you have to only elite - then the loss of these units will impact your army greatly in terms of stats. Earning more renown and gaining recruiters would be the way to bring forward a large force and to progress forward!


I look forward to bring you further updates!
Until next time,
Dylan

I recently discovered a new pixel art application that has proven to be quite useful - especially when the software I usually use isn't available. Piskel is both free and has most of the basic features you'd want to draw pixel art - I recommend checking it out, particularly if you want to have a web-based drawing software you can access from anywhere that you can access a browser!

After experimenting with Piskel - I also decided to try out a different style of pixel art. I decided to try out some grey-scale drawing and I immediately enjoyed it! The style is minimalist and the challenge of creating objects and representing lighting via only shades of grey was both entertaining and beautiful!

After I made the trees, I decided to create some rocks, and a cart. I made them as seperate tiles in Pyxel Edit and then experimented with the background and brought them all together to create the above image! I'm going to continue drawing more objects and adding onto the image and see what I can come up with!

Until next time,
Dylan
Posted by Dylan Moon at 07:55 No comments: