This week I began working I've beginning to finalise a small working prototype of Dawn of Civilisation. By that point - I've begun tuning the prototype's numbers rather than implementing new systems and features.

In a process like this - having a spreadsheet software is definitely very useful. I have been looking into Machinations to help simulate economic information within games. However for this project I'm sticking with using spreadsheets - perhaps I will use machinations later on down the line.

Once some of the parameters have been set up in a reasonable manner. I just need to add the weather and seasons system to help provide the game with some element of planning required. Finally - I was thinking on adding a few basic journal / guidelines / objectives for players to reach. This may be helpful since the game has no set aim or goal as of yet!

Until next time,
Dylan
Posted by Dylan Moon at 05:47 No comments:

I apologise for the very delayed post since this was suppose to be out on Tuesday - but this week has been just busy, busy and busy. Unfortunately I do not have much new in the way of Dawn of Civilisation to show as I've barely had time to work on the project itself.

Up until January I do have a plan on getting a few features complete to have it be in a playable state. This way - I am free to work on my other obligations and continue working on the project following the deadlines of the other submissions!

The features I plan on having implemented up to that point include  the core game-play itself and the changing weather to allow for some degree of long-term planning from the player. I look forward to bringing you more updates on that later on!

Until next time,
Dylan
Posted by Dylan Moon at 01:28 No comments:

Progress on Dawn of Civilization is advancing nicely. I decided to experiment with the idea of creating a larger map and allowing the player to scroll around the map. Based on the feedback I received. I was pleasantly surprised that testing it out was relatively simple and straight forward - I had the system functioning within 10 minutes. Ensuring the interface and UI buttons following the view when I previously assumed the player will remain in a single screen - took a lot longer. However - the result was very well worth it! 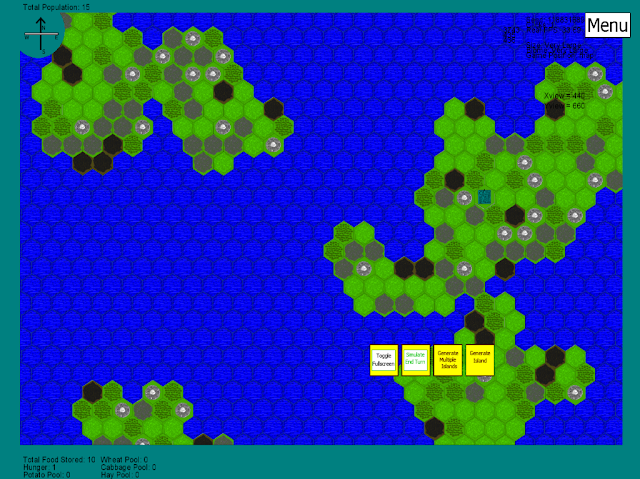 At this point - I'm working on having a very basic playable version to get some testing and feedback done. This will help guide the project more specifically towards ensuring that the game provides the user with a fun experience. Especially in terms of the UI itself and where elements are placed and what elements would have been nice to have on hand when taking specific decisions. 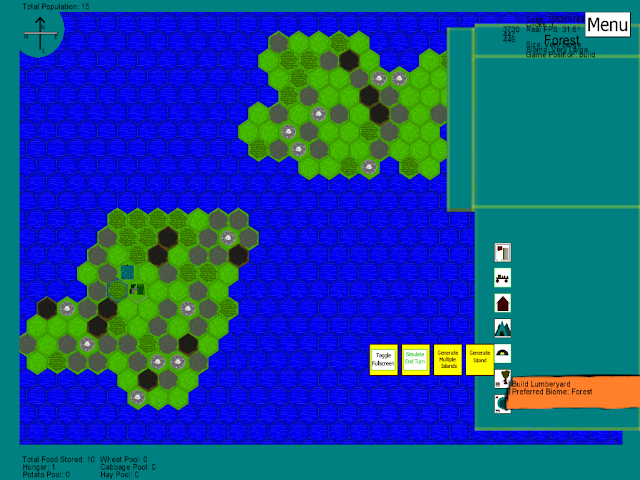 I hope that by the end of this week - I will have a small playable prototype to test out!

Until next time,
Dylan
Posted by Dylan Moon at 02:10 No comments:

The last week has been rather busy - I did manage to get some work done on Dawn of Civilization however. It was mostly a case of modifying a few existing pieces of code to allow for the consumption of foods [previously it was simply 'crops']. 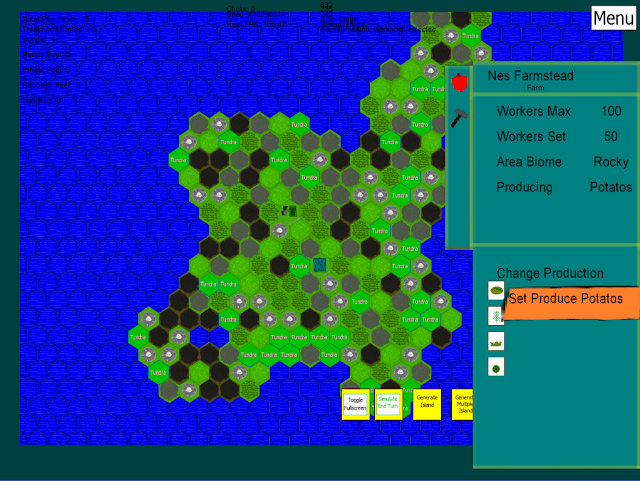 I also implemented the ability to change what a farm produces. Whilst a minor element - the code itself can easily be modified to account for other types of resources - such as ore from mines and stone from quarries. I have also modified the graphics - I admit I am not proud of it per se and I will be modifying it later on most likely; however for the time being whilst the project is still being heavily developed in it's basic components - I do not consider the visual component to be a high priority. The UI is another matter - I will be focusing more and more on making sure the UI is well-organised and placed as I get a better idea of what needs to be shown when and where; as well as what will be available in a seperate menu.

I hope to have something testable by next week. Up to this point I will be adding the population growth component, the ability to set workers on work-posts, efficiency of work-posts and work-posts being affected by the tiles they occupy. Progress has been a little bit slow as I had to divert my attention to some other tasks required by my masters programme. I will be looking into the concept of 'Emergence' in games - something I hope will be both interesting and useful to learn about and explore.

Until next time,
Dylan
Posted by Dylan Moon at 11:30 No comments: