Game Maker Progress 42: Preparations for Play-Test and Next Step

As I begin preparations to have some play-testers try out the project - I started working more towards usability by fixing the tool-tips and working on the interface. The play-test will help offer a few insights on what's already been done and what can be improved, and changed. Aside from a few parameters being tuned, and fixing a few basic bugs - the game for the initial play-test. At the moment - most of the parameters have been set with testing in-mind; as such they need to be adjusted to what they could be for game-play purposes. 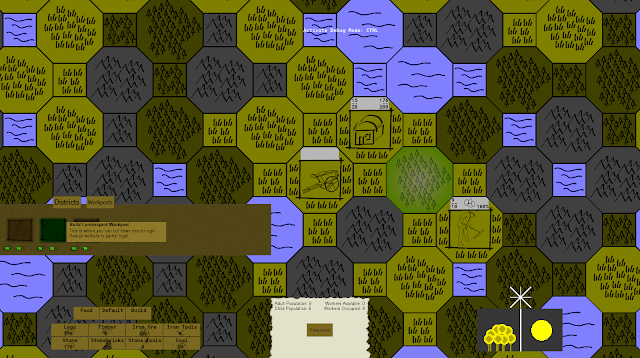 I have a number of ideas on what to change, add and remove that could help the game's experience. Thinking on how to go from the early-game to the late-game and ensuring the game remains compelling was one of the more important considerations as I continued thinking on could be added next, after the play-test.

Two ideas that came to mind is to have an underground-map which the player can dig-out to create underground structures. The second idea is to allow the player to have certain decisions and choices that will influence their nation. These can range from trade deals, to large immigration, to dealing with issues and so on. Following the play-tests - I will begin planning out the next build, plan out what features to implement, fix issues, and adjust elements based on feedback!

Until next time,
Dylan
Posted by Dylan Moon at 08:32